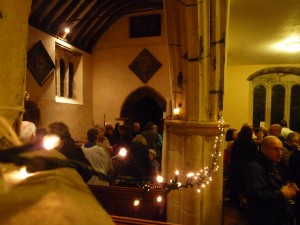 Just because we haven’t currently got a vicar doesn’t mean we can’t put on an awesome Carol Service.  Having had a wedding at the church on Saturday 19th December, the church looked lovely and very welcoming once a few candles had been lit in place, the floodlights outside all worked so the paths to the church were well lit and once 95 people are inside on an unseasonly warm night, it was warm inside.

Not the traditional nine lessons and carols but an unusual few lessons telling the Christmas story with lovely anthems from the choir interspersed with traditional and not so traditional carols for the congregation to sing.  And if any evidence were needed, the singing of Whilst Shepherds watched their flocks by night proved that the Methodists often have the best tunes!  Jay aged 9 yrs old won over all present with his reading – he certainly deserved the applause having dealt with some difficult biblical names!

Finally Rev Stewart Timbrell showed how much he had enjoyed leading the service by sharing one or two jokes with the congregation who were then invited to partake in mulled wine and mince pies while the children ate chocolate apples and squash.

A very traditional way to really start the final run up to the big day!

We use cookies to ensure that we give you the best experience on our website. By continuing to browse this site you give consent for cookies to be used.